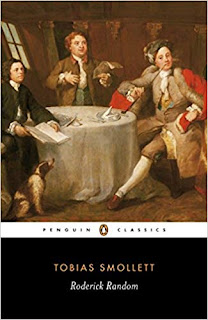 The Adventures of Roderick Random, by Tobias Smollett

Why on earth would I read a very long 18th-century picaresque comedy-drama that is practically unreadable by modern standards?  Well, as with so many things, it's John Bellairs' fault.  I am a big fan of his books, and like many of the more obsessive Bellairs fans, I think it's neat to do things connected with them.*  In one of the later books, Professor Childermass informs Johnny that the reason his brother Perry's proper name is, preposterously, Peregrine Pickle, is that their father was a fan of Tobias Smollett.  The professor himself is named Roderick Random.  So why not see what ol' Dad Childermass admired so much?

Roderick Random was Smollett's first, and most famous, novel, published in 1748.   After that come Peregrine Pickle and Humphry Clinker, and I do have both, but who knows if I'll read them.  Smollett was in the same London as so many other famous Georgian writers, but he mostly thought they were idiots or jerks, and they thought the same of him.  So he was not a friend of Johnson's or anything.  The story is partly autobiographical, especially the bits in the British Navy, which were considered strikingly true to life.

Roderick Random, born nearly an orphan and brought up by unloving relatives, does manage to scrape an education -- he can read the classics, and studies medicine.  This should allow him to establish himself as a surgeon and live in a reasonably prosperous manner, but instead his life is one long series of adventure, misfortune, and accident.  He is an apprentice, a Navy surgeon, an indigent, a servant, a gambler, and a soldier, among many other things.

Roderick and his best friend/servant Strap are a comedic buddy duo.  I have never seen Dumb and Dumber, but I suspect that it's a distant cousin to this novel, which must be one of the original  slapstick bro comedies.  Chamberpots and their contents feature largely, as do fights and beatings, stolen clothing, drunken adventures, and escapades with ladies of doubtful virtue.

There are plenty of fortuitous meetings and recognitions, too.  You would think there were only about fifty people in the British Navy, and not many more in England -- or the rest of the world for that matter.  And of course, in the most approved Georgian manner, all the good people end up ridiculously wealthy, and all the bad ones are reduced to penury.

It's quite an interesting read as a historical artifact.  The modern reader won't enjoy it so much as a story, but it's not terrible.  I prefer Evelina, but the preachier or more repetitious parts of Pamela are much harder to endure.  Tom Jones is probably better but I haven't read that for 20 years so cannot judge.  If you're looking for an 18th century read, you could do worse than pick up Roderick Random.

I'm very intrigued by this one but it will have to wait for some other books to come up on my list. Mentioning Tom Jones, I'm really looking forward to it; I've heard that it's excellent. So many books .... well, you know! And trust you to be on your 6th summer book! I just don't know how you do it!!

Thanks for the review! I'm currently reading Cecilia by Fanny Burney and enjoying it--but who knows when I'll ever finish it?!?!

Your plot synopsis sounds fun and exciting, but you say the book itself is largely unreadable (for a weenie like me anyway.)

i liked reading Smollett... Peregrine Pickle was a riot... he was a Naval surgeon if i remember correctly... but RR was probably his best... Fielding was a bit more sober...

I thought RR was a riot, my review is here

But "Humphrey Clinker" was unreadable for me.......

I admire exploring connections and themes between books.