Kar Kaballa / Tower of the Medusa

Kar Kaballa, by George Henry Smith / Tower of the Medusa, by Lin Carter 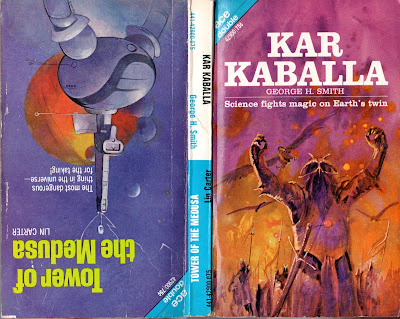 So fun to have an Ace Double title to read for Vintage Sci-Fi January!  It was hard to choose which to read first, but I went with

Kar Kaballa, which was pretty great.  I would happily read the other three books set in this world, but sadly they seem almost impossible to come by.  On Earth's twin world (in another dimension, not on the other side of the Sun), much is the same, yet different.  Our myths are their reality and vice versa; the Annwn Empire, with its capital of Avallon, is not the British Empire, but it was founded by Arthur when he was brought there by Morgan le Fay.  Shakespeare is a folk-figure who is popularly credited with great plays that are actually folktales sprung from the people.

Annwn is complacent and has paid no attention to the Gogs across the sea, but Dylan MacBride, a Highlander soldier, knows that the Gogs (think Mongolian hordes) are about to invade in huge numbers.  He's desperate to convince someone of the truth, and then he meets this strange man who claims to be from a United States.  He has this machine -- a Gatling gun he wants to sell.  Perhaps together they can save the Annwn Empire from being overrun by the Gogs?

This was a very fun novel that can only be described as swash-buckling, and also kind of presciently steampunky.  Sword fighting!  Airships!  Gryphons!  Evil gods that lurk under volcanos!  Celtic priestesses!  Evil undead minions!

Tower of the Medusa, on the other hand, was dreadful.  An overblown mess, it was at least hilariously badly written and extremely short.  Set a thousand years after the collapse of a great galactic empire, as planets are only just beginning to re-master science, we have Kirin, the greatest thief in the galaxy, hired to steal the Medusa, a weapon which would allow the holder to grab ultimate power.  It's been hidden and fanatically defended by a cult for thousands of years.

No fewer than three people want Kirin to steal the Medusa, which lies beyond a complex and deathly labyrinth.  The mages, who want to destroy it; a witch-queen, who plans to rule, and the Veiled One, the evil manipulator who will simply wait until Kirin gets the device and then grab it.  Here are some samples of the text:

Then they [25 assassins] came at him again, silent and deadly as panthers. His boot-heel caught one full in the belly. The little monster fell backwards in the slop, gagging and spitting. Three more sprang at his throat. One he slew with a swift jabbing blow to the nerve-clump just below the base of the skull behind the ear—a stroke with stiffened fingers he had learned years ago from a Ghadorian nerve killer he met on Shimar in the Dragon Stars.
But more came at him through the mists. He fought them with everything he had. Never had he battled so desperately, not even that time the murderous priests of Zodah trapped him in the act of stealing the tiara of their harlot queen. But the little men with three eyes were the most deadly adversaries he had ever faced. They fought in utter silence with a grace and skill and economy of strength that was astonishing.Then he knew them for what they were—trained killers! Members of the weird assassin cult of Pelizon across the cluster from Zha.
The Death Dwarves!

The picture was now a scene of somber majesty and brooding terrors. No sound accompanied the space-vision, but the imagination of the viewer could almost hear the cold wind that shrieked like a banshee through the fang-sharp needle spires of naked rock that clawed up into the mist-veiled sky. There was a flat and barren plain, an endless desert of dim grey crystals that stretched from world's edge to world's edge. Over all stretched an eternal cloak of phantasmal fog, torn and tattered into a thousand leering faces and weirdly haunting shapes by the howling winds. The shadowy rags of mist streamed in undulant and serpentine tendrils above a titanic structure of dead black stone that loomed against the fog-phantoms like some colossal citadel of demons. The black castle was unthinkably huge, immeasurably aged. A forest of sloping turrets and grotesquely-formed domes, a wilderness of arcades and columns, squat towers and yawning gates like the leering maws of nameless stone monsters. The chill, the eerie cry of endless winds, the haunting air of mouldering decay and aeon-old desolation struck awe into the very roots of Kirin's soul. "That black castle is Djormandark Keep," the Witch Queen murmured at his side.
But he did not need her words to tell him this, for no man could mistake the colossal ebon fortress. Djormandark was one of the enigmas of the Universe, and the very world whereon its titanic ruin reared its cloven, castled crest was known as the Planet of Mystery—dark, legend-fraught Xulthoom, the World of the Hooded Men.

He was incredibly ugly. His mouth was a broad lipless gash and his three eyes were glowing slits filled with evil malignant glitter. His skull-like head was devoid of hirsute adornment.
"Master!" he croaked. The robed figure turned to regard him.
"Speak!" the robed one commanded harshly.
"We have lost contact with Pangoy," the Death Dwarf said. "His receptors went dead in the third quarter of the Hour of the Toad."

Kar Kaballa was a lot of fun.  I would read that again.  Tower of the Medusa was so bad that it was only sort of fun, kind of like The Star Wars Holiday Special.  You think it will be ironically fun, but you're wrong.
Posted by Jean at 6:00 AM