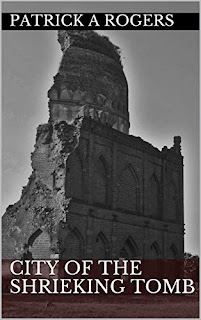 City of the Shrieking Tomb, by Patrick Rogers

Earlier in the year, I reviewed The Green Unknown, a memoir of hiking around the northeastern Indian state of Meghalaya.  Then Patrick Rogers contacted me again about his new book, a novel this time, also set in India and with an irresistible title.  As my friend April used to say, twist my rubber arm -- I had a lot of fun reading this ghostly tale.

Rick is a photographer traveling around for a project on old Islamic architecture, and he's trying to get a bus to Bidar without going far out of his way to Hyderabad for it.  A friendly doctor, Awaz, gets him on a bus, which then breaks down at Awaz' hometown of Humayunpur -- but Awaz doesn't want Rick to stay.  Outsiders are not welcome in Humayunpur.  But since there's no alternative, Awaz reluctantly invites Rick to stay overnight, as long as he's leaving first thing in the morning.

The bus is still broken in the morning, though, and Awaz softens a bit, inviting Rick to see some of the local sights.  No photography allowed!  Awaz and the local imam take their visitor to the old mosque, which turns out to be an incredible work of art, totally unknown to the outside world.  Rick is desperate to take photos -- it's the find of the decade!  He'll be on the cover of National Geographic! -- but Awaz and the imam are adamant, coming up with excuse after excuse as to why visitors can never come to Humayunpur.  (What if somebody bonks their head?)  Rick is exasperated by their flimsy reasoning, and they're sick of his persistence, so they tell him the real reason: there's a demon.

Rick immediately rolls his eyes at this, which is of course why they didn't want to tell him about it.  He challenges the imam: doesn't Islam frown on this kind of superstition?  Well, yes, the men concede, but since this particular demon is totally real and ate the last smarty-pants imam who disapproved of superstition, what are you going to do?

Rick doesn't buy any of it.  Not when a sophisticated, mysterious young woman explains some of Humayunpur's history, and not when he explores the town and meets obvious resentment.  He's going to get to the bottom of this -- and so he does.

This was a really fun read.  The reader can see what's going on a bit more easily than Rick can (poor Rick doesn't know he's in a ghost story, and we have all known guys just like him), and it's a nice spooky puzzle to work out.  Just a few bucks on Kindle, it would be a good pick for some Halloween shivers.


I received a free digital copy of this book in exchange for an honest review.
Posted by Jean at 6:00 AM