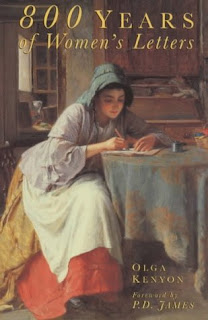 Way back in the 1990s I bought this book, and then never got more than about 50 pages into it.  I used to think I liked historical collections of letters, but in fact I do not.  Still, I've always meant to read this, and now I have.  Kenyon collected letters from lots of women, from a few lands and many times.

The letters are arranged by topic, which I did not love.  Sections address things like domestic labor, romance, travel, illness, and so on.  Each section has a little introduction, which is usually unnecessary and frequently embarrassingly laden with trite filler like "Women have travelled for multifarious reasons."  Well, yes.

Hildegard of Bingen I think is the oldest writer, but not the only medieval woman.  Other names include Elizabeth I, Virginia Woolf and Vita Sackville-West, Mary Wollstonecraft, and Madame de Sevigne, a prolific correspondent.  Many of the writers are not famous at all.  Very odd indeed is the inclusion of some fictional letters from novels, most notably Mariama Ba's So Long a Letter.  That really puzzles me.  The letters are also nearly all from England, France, or sometimes the USA, with maybe a couple of Germans.  The only non-Western letters are fictional.  There are no Asians or South Americans at all.

It now comes off as hopelessly 90s, which I thought was interesting in itself.  How can a collection of historical letters have such a 90s flavor?  I think it is the particular style of the writing, which is feminist, but feminist in a very 90s way.  A collection gathered now would be quite different, I think, and would put a good deal more effort into getting more global coverage -- or else it would focus on one country or time.

Don't get me wrong; I enjoyed quite a few of the letters.  But I have learned since I bought the book that I don't love reading collections of letters, and this one had such weird quirks and omissions that it was not all that fun to read.
Posted by Jean at 6:00 AM

>>> I used to think I liked historical collections of letters, but in fact I do not.

SAME. Hardest of sames. In fact, actually, I am going to take this opportunity to run upstairs and cull a book of historical letters that I bought in my teens and never read because I don't truly care. Thank you, friend. You have set me free.