The Age of Bede

The Age of Bede, by various people such as for example Bede

I started off the year in a very Anglo-Saxon medievaly sort of mood.  I guess I'm still in it, since today I put two Old English language study books on my Amazon wishlist.  Still, it took me a long time to read this collection of pieces, because they are mostly not super-gripping.  Worth reading for several reasons, and the last one is fantastic, but still.  Anyway, here we have four early Anglo-Saxon sources from the north of the British isles:

The Life of Cuthbert, by the Venerable Bede
Cuthbert was the prior of Lindisfarne (and a bishop too!) in the mid-7th century.  He was greatly beloved, did a lot of missionary work, and was OK with accepting Roman practices in the British Church, which a lot of people were not.  He was considered a saint, too.

The Life of Wilfrid, by Eddius Stephanus
Wilfrid was bishop of Northumbria, also in the mid-7th century, but he wasn't allowed to do a lot of bishoping.  Wilfrid accepted and wanted to enforce the Roman method of figuring the date of Easter (a method which differed very little from the Celtic, and looks incredibly minor to a modern reader), and this was such a contentious issue that the local king appointed a different bishop (Bishop Chad!) in his place and threw Wilfrid in prison and did all sorts of things to keep him from his job.  Wilfrid seems to have spent much of his time traveling to Rome to plead his case over and over with the Pope, only to go home and find the locals still defiant.  Eddius portrays Wilfrid as a martyr, but others seem to have disagreed.

The Lives of the Abbots of Wearmouth and Jarrow, by the Venerable Bede
This is a short history of the various abbots over the monasteries St. Peter and St. Paul.  The important bit, to me, is that this is where we read about Benedict bringing lots of books from Rome.

The Voyage of St. Brendan
Now this was nothing but fun!  It's the legend of St. Brendan, a 5th century Celtic monk who sets sail to find the Isle of the Blessed, together with some fellow monks.  They have wonderful adventures, sailing around for years and having Easter feasts, camping on an island that turns out to be a whale, and finding an island that may be a very fanciful description of an iceberg.  They find an entrance to Hell, and all sorts of great stuff.  This is by far the most entertaining part of the collection.

I sure would love to make a trip to the north of Britain someday, and see all these places.  That would be pretty great.

That last one could be the plot of a modern fantasy novel. Seeing all those places after reading these early works would be fascinating.

Ivory Apples, by Lisa Goldstein  I think it was Jenny who loved this book a while back, and I've meant to read it ever since.  RIP fina... 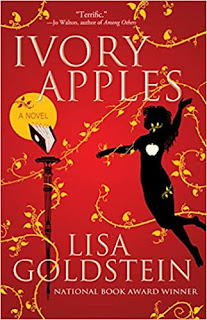