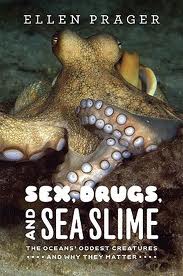 Sex, Drugs, and Sea Slime: the Ocean's Oddest Creatures and Why They Matter, by Ellen Prager

Ellen Prager would like to introduce you to some interesting critters.  She will happily lead you on a trip through our oceans to meet copepods, hagfish, jawfish, cookie cutter sharks, and her favorite--the bone-eating zombie snot worm.  This is a great little book, but I'm warning you now: don't read it over lunch.  Unless maybe your lunch isn't very good anyway and you're OK with skipping it.  If you want to enjoy your lunch, pick a different book.

Each chapter focuses on a particular kind of sea-creature, starting with the teeny ones like diatoms and arrow worms, moving on up through snails and coral reefs, and ending with larger fish.  There are chapters specifically about extreme environments and what Prager calls "X-games" (a sort of Guinness book of skills).  Every section ends with a piece about current research into the animals and why we should pay attention to them.

Prager's favorite subjects are slime, sex, and drugs, in that order.  She gleefully informs us of the amazing multitude of ways that sea creatures produce and use slime, mucus, and goo.  Mating habits, the weirder the better, get lots of space.  And drugs--both the venomous and the medical--are of interest as well.  But mostly it's all about the goo.

Her tone is half lay-scientific and half casual, bouncing between detailed descriptions of tiny creatures and comments like "next time you happen upon a lovely sea star, looking down upon its brightly colored surface, you will actually be staring at its butt."  It would make an excellent supplementary book about ocean biology for a high-school student, but said student will probably refuse to eat lobster ever again--thus saving you money!

I liked the book fine, though I spent half the time fairly grossed out.
Posted by Jean at 7:30 AM

I could probably go though the book and figure out which of those I have eaten. You can eat some weird raw sea food in Korea.

I believe you. Especially since she tells how to cook or eat half of the critters.